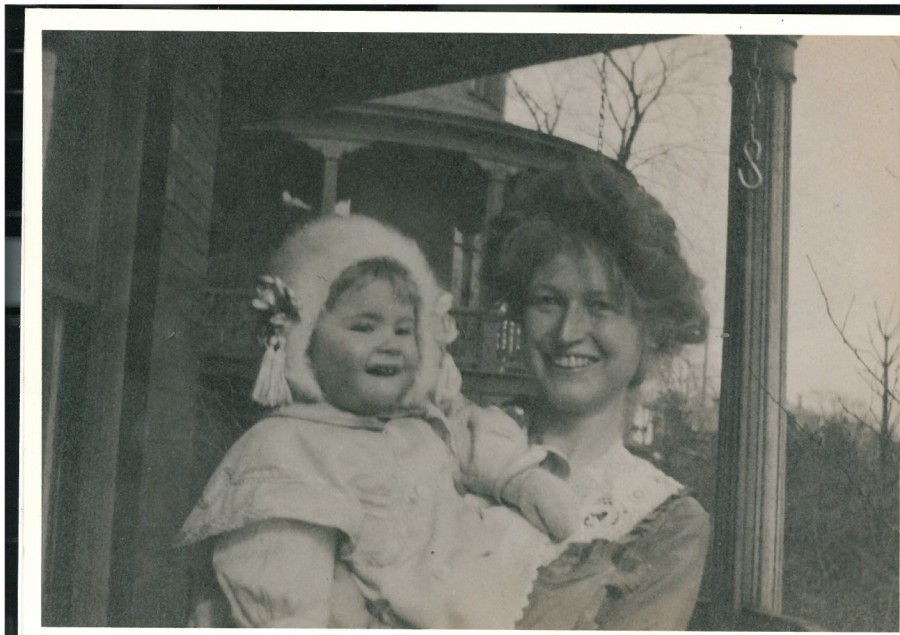 While all five family members are represented in the collection, it is Gladys who emerges as its star. She lived a long and meaningful life as a wife, mother, suffragette, poet and active Portland citizen, and her papers are a valuable addition to the Maine Historical Society.

Gladys Doten Chapman was born in Maine to Roswell and Clara (Stevens) Doten. She attended Waynflete School and later graduated from Portland High School in 1902. She went on to Wellesley College, graduating in 1907. The decade following her graduation was a busy one. She married Philip F. Chapman Sr. in 1909, had three children, and dedicated herself to the fight for women’s suffrage. She played a prominent role in the Maine Suffrage League and was an original member of the Portland League of Women Voters.

In addition to politics, Gladys was involved in a wide array of organizations and hobbies. She wrote poetry throughout her life and some of her poems are preserved in this collection. During the 1930s, she wrote book reviews for the Portland Evening News. She was president of the YWCA, the first secretary of the Portland Players, and a longtime member of the Portland College Club. She was also involved in Greater Portland Landmarks, the Wellesley College Alumnae Association and the Portland Museum of Art.

While Gladys’s resume is impressive, it doesn’t tell the whole story. A list of accomplishments can illustrate a person’s interests, values and intellect, but not their personality. That is why the correspondence in this collection is such a treasure. During the 1930s and 1940s, Gladys wrote detailed letters to her daughter Virginia, regaling her with anecdotes and colorful commentary about her daily life. Here are a few examples:

In a letter from January 1937, she speaks of Philip Jr.’s attempt to fix their antique Ford.

“He spent about all of three solid days working on the antique Ford… When it finally started, it sounded like the bombardment of Madrid. I got up and looked out the window to see who [was] shooting machine guns, never suspecting it was coming from my own garage.”

In another letter from April 1937, she describes a shopping excursion with daughter Marion (nicknamed Emmy).

“Did she tell you how narrowly we escaped bringing a monkey home with us? If she had had the money I couldn’t have stopped her; but she had only ten dollars and I flatly refused to lend her the rest. It wasn’t like Stella; it was one of the kind with a greenish tinge to its coat and a hairless rear—you know. Also a bat tail, the kind that is the same size all the way down and stops suddenly and bluntly.”

Later in the same letter she mentions her work as a book reviewer and Emmy’s continued pursuit of a monkey.

“There is a pile of books waiting for me; I can’t bear to face the fiction ones… Emmy has been working by the hour clipping and pasting the last month’s reviews into my own book, to bring that up to date. I told her she was a fool if she didn’t take advantage of a chance to kill several birds with one stone and write my publishers’ letters for me and get secretarial practice and earn cold cash at the same time. I am afraid the desire to accumulate the price of a monkey is the driving motive.”

In another letter from September 1939, Gladys describes how she and Marion, who was recovering from a head cold, were inconvenienced by unexpected guests.

“This morning when we were looking our worst Joy and Mrs. Krahmer arrived. One of the disadvantages of being on the ground floor is that it is harder to refuse to see people. And since they had seen her before and she was undeniably better, it seemed impossible not to ask them in. Marian didn’t want to talk, so she pretended that she couldn’t and just whispered, hoping they would go soon. Then this afternoon… in drove Peter Lallemant, the attractive young man in the Casco Bay Timber… Of course having told the German ladies this morning that she could not speak aloud, she had to keep up the same fiction with him, and while it was poetic justice, it was a good deal of a strain whispering for nearly two hours.”