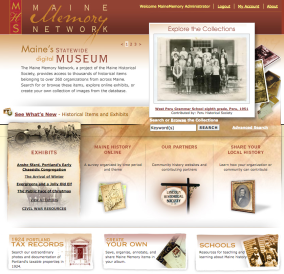 Our Digital Engagement department reports that 2014 has been an exciting and productive year for its staff–digitizing new items, visiting communities throughout Maine, and providing online access to historical material for people across the world through the Maine Memory Network (MMN). MMN is an online museum that makes thousands of Maine-related historical items and online exhibits from our Contributing Partners–museums, archives, libraries, and historical societies–available to online viewers. 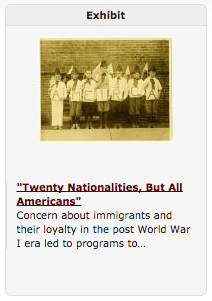 Some popular online exhibits include Amazing! Maine Stories, Twenty Nationalities, But All Americans, Auto Racing in Maine: 1911, Cape Elizabeth Shipwrecks, Longfellow: The Man Who Invented America, and Working Women of the Old Port.

(as measured by page views)

One of the most used collections on Maine Memory Network is the 1924 Portland Tax Records with more than 20,000 images and building information of taxable properties from 1924.

In January 2014 we announced that the 1924 Portland Tax Record Digitization project was finally complete after four and a half years of work–organizing, scanning, and cataloging the records and images for all the taxable properties in Portland (and the Casco Bay islands) in 1924.

We now have more than 20,000 records online, which are searchable and images are available for purchase. The Portland Press Herald wrote this article about the success of the project through the collaborative efforts between MHS, the City of Portland, and the Portland Public Library.

Bill Barry, our Research Historian, is quoted in the article, saying, “It’s like looking through a telescope at Portland at that time…I love it, because it’s a time machine. You really can go back and see how it is.”

Local and Legendary: Maine in the Civil War

In partnership with Maine Humanities Council, we awarded the second set of Local and Legendary: Maine in the Civil War grants, funded by the National Endowment for the Humanities, to Bethel, Livermore-Livermore Falls-Jay, Pittsfield, Rumford, and Scarborough.

This year and next, community teams explore

connections between Maine’s Civil War story and national themes and experiences. The Digital Engagement department provided training and support to these communities as they digitized their collections and uploaded items to Maine Memory Network. Keep up with all the teams and their progress on our (Re)Living History blog, dedicated to Maine Memory Network and educational outreach.

One of our new Contributing Partners to Maine Memory Network in 2014 was the Tate House Museum. Longtime MHS friend (and sometimes exhibit curator) Laura Fecych Sprague, who is the consulting curator at the Tate House, spearheaded the effort to get some of the Tate House’s collections on MMN. Elizabeth Hopkins, a student at Skidmore College and a summer intern at the Tate House, learned how to scan, photograph, upload, and catalog items for MMN. She uploaded 20 items, including letters and documents that she or others transcribed. She did research in the Tate House collections and, along with Laura Sprague and Tate House Museum Assistant Grace Batsford, wrote the online exhibit, The Life and Legacy of the George Tate Family.

Other new Contributing Partners include the Lithgow Library in Augusta and the Whitefield Historical Society.

Candace Kanes, our MMN Curator, has been working with Sheila McDonald, Deputy Director of the Maine State Museum, to carry out a longtime interest of the two organizations: make at least part of the John Martin Collection – co-owned by MHS and MSM – available online. John Martin (1823-1904), a native of Ellsworth who lived primarily in Hampden and Bangor, called himself “expert accountant.” However, Martin was much more.

Starting around 1864, Martin wrote accounts of his life and times so that his children would know more about him and about the community in which they grew up. His commentaries on agriculture and gardening, architecture, politics, business, church, schools, transportation, singing and dancing, and family life offer fascinating details about the era and the Penobscot River region. In addition, Martin illustrated his Journal and the three scrapbooks that are part of the collection.

The Maine State Museum wrote a grant proposal that was funded by the Delmas Foundation to digitize the Journal and scrapbooks, to prepare transcriptions, and to put at least some of it on Maine Memory Network. The 650-page journal will be the first to go online, early in 2015!

VintageMaineImages.com (VMI) is an online source for purchasing reproductions of more than 26,000 historical images (all of which are on Maine Memory Network). VMI sells archival photographic print reproductions, as well as high-resolution digital files and creative use fees. When we sell an image that was uploaded to our site by a Contributing Partner, we send them a check for 50% of the sale, so the money goes back into historical preservation projects in communities throughout Maine. In 2014, VMI sold a total of 584 images, 332 of which were uploaded by 44 Contributing Partners. The 1924 Portland Tax Record images proved to be the most popular type of sale with 173 images!

Throughout 2014, images from our collections–as well as the collections of our Maine Memory Network’s Contributing Partners–were used in many interesting projects including exhibitions, books, television, and film. Our Image Services Department manages the rights and reproductions of collection material, and works with authors and organizations to provide the images needed. Images were also used in several interpretive panels this year including one at the 150th Year Celebration of Prince Edward Island sponsored by the Mi’kmaq Confederacy, one at Fort Preble on the campus of SMCC in South Portland, and another that was part of a series of panels at the Church of St Michael and All Angels in Princeton, (United Kingdom) which told the story of the American prisoners of war who built the church in the 19th Century.

In August, we welcomed Tilly Laskey to the Maine Memory team as our Content Assistant. Tilly assists us in all aspects of running the website including outreach, training, and research.

This picture shows Tilly (right) with Kathy Amoroso, Director of Digital Engagement, at the Maine State Library for a Maine Archives & Museums conference.