Walking through the Maine Historical Society exhibition, Home: The Longfellow House and the Emergence of Portland, I am surrounded by beautiful objects that have been carefully preserved by MHS for centuries, each telling stories of how the Wadsworth-Longfellow House remained an anchor amidst the city’s unfolding drama. As I near the far end of the museum, I spot something out of place: a display of objects that do not seem to have been carefully preserved—there are cracked pieces of china, a mug with a hole in it, fragments of glass, mismatched buttons, a pipe that appears quite filthy, and an indiscernible object that I learn from the label is part of a man’s shoe. 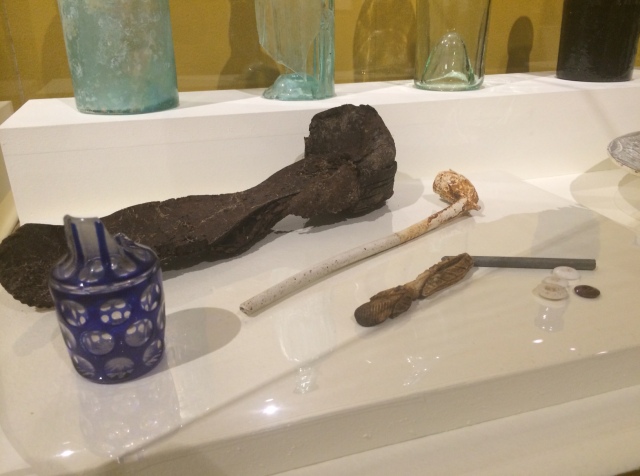 What are these orphan objects and what do they have to do with each other or with the Wadsworth-Longfellow House? I read up on the display in the panel that is titled “The Privy.” Wait, isn’t a privy an outhouse?

The Brown Library at MHS was renovated a few years ago, and the adjacent Longfellow Garden had to be dismantled to allow for the crews and machines to access the building project. In 2008, workers who were rebuilding the garden wall noticed objects in the soil—broken glass and ceramics at first. This prompted an archaeological investigation by the Maine Historic Preservation Commission of the space and, according to the exhibition panel, “determined the ceramics had been thrown into a privy that was once used by residents who lived next door at 47 Brown Street.” So, these objects I’m looking at were in a latrine?

Reading on, I am relieved to learn that when Portland established a sewer system the privy was no longer needed and filled with debris—precisely the objects I see before me. These items serve as a humble reminder of how the immigrant and working class residents of the Brown Street apartments and boarding houses experienced urban living in the mid-19th century.

I am also relieved to see that, despite the fragile condition these former castaways were found in, MHS has dedicated itself to carefully preserving the privy artifacts for centuries to come.

Home: The Longfellow House & the Emergence of Portland is open daily from 10am – 5pm and has an online component on the Maine Memory Network.