In a wide-ranging talk that moved from Longfellow and the importance of place, to Quaker diaries and John Mead Gould, to the historical riches of physical newspapers, author Nicholson Baker engaged and educated a capacity crowd last night at Maine Historical Society. 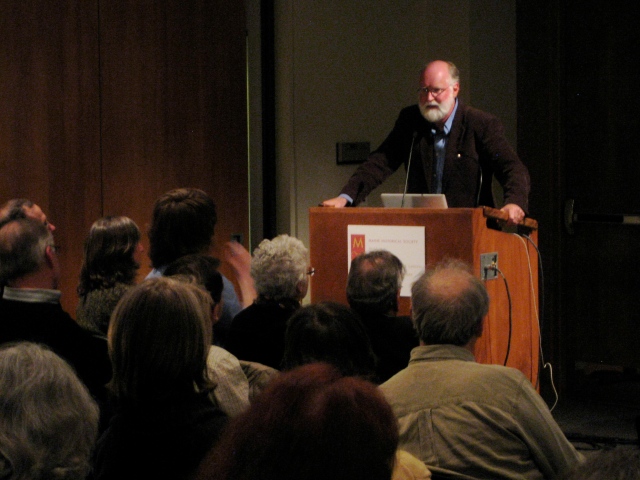 Baker’s talk, “Hold On: The Privilege of Keeping Old Things Safe,” echoed themes raised in his 2001 book, Double Fold, about the preservation of old newspapers and books, and the mechanisms, such as microfilm, that were being used to replace physical copies. The talk was the second of seven “Richard D’Abate Lectures: Conversations about History, Art, and Literature honoring the longtime MHS executive director, who is retiring this spring. 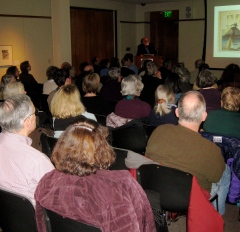 Baker’s topic is particularly relevant to MHS given both its mission to “preserve the history and heritage of Maine” by collecting and caring for the state’s historic treasures and the Society’s early embrace of the importance of digitizing historical collections via its online museum, Maine Memory Network.

Baker, who lives in Maine, opened by thanking D’Abate for introducing him more fully to the value of Longfellow’s poetry–which he never encountered as a young English major–and for showing him around MHS and the library when Baker was researching Double Fold. He only had a brief tour back then, but decided to return prior to his “Hold On” talk to look more deeply into the stacks. The items he discovered, with the help of library director, Nicholas Noyes, and D’Abate delighted him.

An interest in the Quakers pointed him first to two “A Line a Day” diaries kept by Hattie O. Cox in 1918 and 1945, images of which he showed to the audience. The small pages contain four entries from the same day of the year, across four years. D’Abate suggested that he also look at the unusual and meticulous diary of Joseph “Handkerchief” Moody, written completely in code.

Finally, Baker asked Noyes to pull out his favorite diary. Noyes brought him two diaries by Civil War Major John Mead Gould, as well as a book Gould wrote about the war. While Gould’s book and the diary he kept during the war itself is rich with battle details, it was the post-war diary of Gould’s daily life back home–covering everything from anxiety over the Spanish-American War to the author’s recovery from surgery–that most intrigued Baker.

“I felt I was reading an unpublished novel,” said Baker. “Paging through a diary, you have a shell over you that’s the shell of ‘today-ness,’ but it begins to slough away, and you enter” the author’s shell. “You are forced to slow down and think about a life that doesn’t have as many advocates”–as, say, a Longfellow, or another well-known individual.

While high-quality digital versions–such as what exists on Maine Memory–of the priceless artifacts are a great and useful invention, “physical things have an eloquence that copies don’t have,” said Baker.

It was this belief that led to his crusade to save newspapers that were being destroyed. In 1999, he and his wife founded the American Newspaper Repository and rented an old mill building in Rollingsford, New Hampshire, to purchase and store long runs of papers like the Chicago Tribune and Joseph Pulitzer’s 1860-1931 New York World, as well as ethnic newspapers such as the Irish World and the Yiddish-language New York Forward. That collection has since been donated to Duke University, which houses the newspapers in a state-of-the-art special collections facility.

Baker showed the audience numerous slides of pages from Sunday editions of the Tribune and the World, many of them in vibrant color. He then compared several with images of their microfilmed versions. In many cases, the difference in both the illustrations and the text is stark. Part of the stories being captured–whether they are major headlines, advertisements, comics, special features, or charming oddities like paper dolls or dress patterns–and the sense of history as a living thing, is lost in the grainy, black-and-white versions.

These papers were “what people looked at on a given Sunday in the United States more than anything else, except maybe the Bible,” said Baker. “There were once millions of copies of these papers in existence. Now there’s just one.”

A self-described lover of machines of all sorts, including electronics, Baker is no Luddite. He just wants us to remember the importance of the real, physical thing that has weight and shape and texture and came from a specific place and time. “Microfilm and digital versions are a good beginning” to preservation, he said, “but they are not a replacement. We always need to keep the original.”